A while back I read a great booked called “The Art of Social Media: Power Tips for Power Users” by Guy Kawasaki and Peg Fitzsimmons. Great book. It pointed out a lot of things I speculated about social media and it told me a lot of new things. So when 2015 hit, I said to myself this is going to be my year and I am going to make great strides on my blog, my books, and my social media presence. You may have said similar. It takes time and patience to do all of that. It seems to also take sleep deprivation.

You may not know this but I am lazy. I try to find the shortest path to any problem. Because of that I am willing to experiment from time to time with radical jumps in logic to see what works and what doesn’t. Social Media has been an ongoing experiment for me. Editor’s Note” By the way, that Wine company still follows me on Twitter as do a lot of the ones who jumped on board because of that Wine festival. 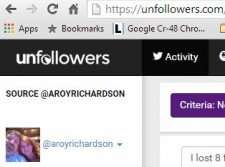 So unfollowers.com shows you how many followers were suspended from Twitter. They made the Twitter Gods mad and were smited by Twitter. But it doesn’t show you their names as well, they are basically just no longer on Twitter. These users usually come from the “$29 dollars and I will give you 5000 followers” type Twitter accounts that pop up all the time. What is often interesting is to see the real people who follow these accounts. It is also strange to see how many real accounts are accounts that are a part of the 5000. Here is a great story about someone who paid $5 on Fiverr.com and what their results were. So today 9 users in the list got suspended. This is how the numbers of followers and unfollowers fluctuate so fast.

But unfollower.com does have some great statistics, such as who are your Zombie followers? Those who followed you and have become inactive on Twitter are Zombies.  I have theorized and even read some articles that elude to the fact that if fewer people follow you than you follow, some people will not follow you. So I every so often prune those I follow, especially those who followed me but then stopped tweeting. If I had followed them back and they stopped posting, not much use to keep following them. For me the magic number used to be I would follow less than a thousand people. See, I don’t like to follow companies or famous people. Sure this probably means I have fewer followers but I prefer to follow genuine real people and I try my best to be a genuine person. Also, I don’t follow Egg Heads. You know what I mean. The ones that never load a profile picture. What do they have to hide? If you want genuine followers you have to be genuine yourself and post a real photo of yourself. Only people who have already earned a lot of followers or who are artists or photographers can post a cartoon head from the Simpson’s and still earn new followers.

Here are some tips that I should use to get and keep Twitter followers:

3. Engage with your users

I use Hootsuite (the paid version) but 99% of what I want to accomplish I could do with the free version. You should try the free version of either. In the future I think I will try Buffer app. Both schedule your content based when your tweets seem to be read the most.

6. Figure out what your niche is. You can’t focus on great content if you are all over the place. My niche seems to be Computer Security, Cool Technology, WordPress, and the occasional funny Internet post. Look at Twitter Analytics to see what of your Tweets interest others. Buffer and Hootsuite also will show you your trends.

Here is an actual complete report if you want to see what Hootsuite provides.Ow.ly Click Summary – aroyrichardsonFeb2015

Part 2, I tell you some of the crazy things I have tried and what worked and what didn’t.