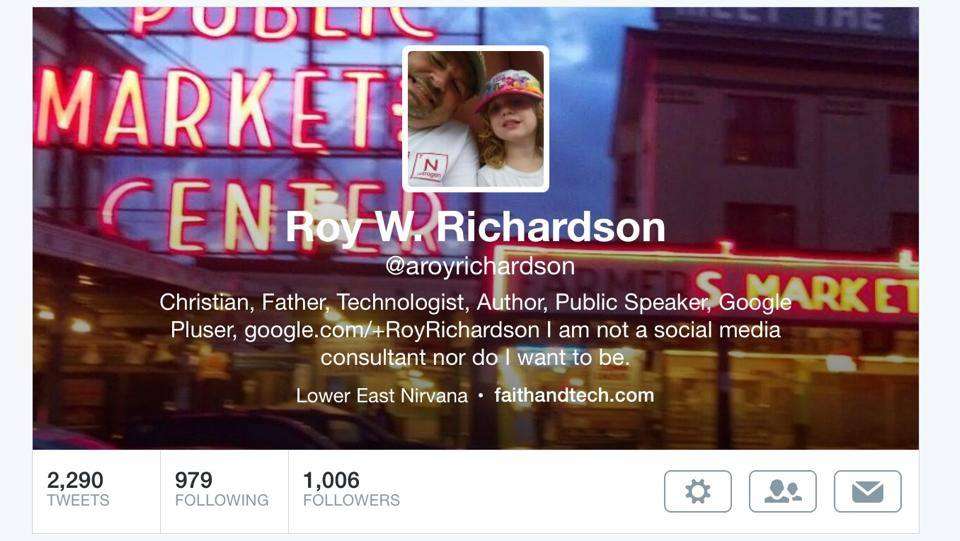 I hate to talk about it really because as I am writing this, the conspiracy is still taking place. I was at 995 followers and stuck there for some reason. The needle kept moving forward and backward, then suddenly I passed 1,000 followers.

But almost as soon as I hit 1,000 I started getting new followers at a very rapid pace. I wondered why. I tried spotting patterns in the users. First it seemed suddenly I was popular with people in Tampa, Florida. Why? I don’t know. Also there was lots of postings for a Wayfarer Wine company. And I was getting lots of followers from a analytics company called Targit. So people who seemed to be affiliated or work for Targit started following me. 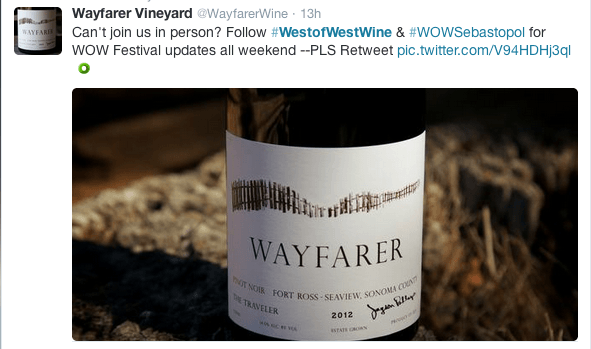 Nearly everyone involved kept retweeting this link and other links about Wine. So I figure I must be in the middle of a ad blitz and their goal is to get as many as possible to retweet pictures of this wine and an event called West of West Wine Festival, which strangely seems to be based out of New York though the Wines featured are based out of California Wine Country.

Then this picture started being retweeted by some of the new people I followed back. 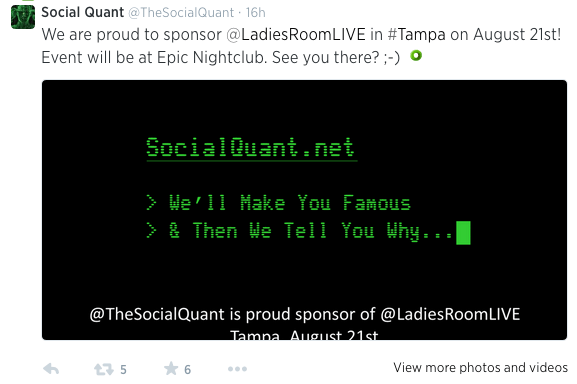 Now I had followed the Host of Ladies Room Live as she started following me, seemed interesting, and I wanted to see what was going on with the Tampa Connection, which I am still puzzling through. I am being followed by a Dentist from Tampa, several people who are connected to Targit (a business analytics company), and others who seem to be caught up in the storm of following. The black screen with green writing gives it a Neo/Matrix feel.  I am going to try and find a free tool that will let me graph the connections and figure out how all of the dots are connected. Additionally I can search on the hashtags and see how many people have used or retweeted this content.

My theory as of 7:30am August 2 is Social Quant uses Targit’s analytics tools to try and spot patterns and make people follow each other. All of the follows from Targit are going along for the ride to see how this all works and are working in the experiment. They are probably all working together to refine a tool they will turn around and sell or already sell to others? The Wine Festival is real and so is the wine and they are what is being hyped by the experiment. So it is all an experiment and as they say, I would like to see how far down the rabbit hole it goes.  I am just a piece in the experiment. And odds are when the experiment is over, I will lose most of my new found followers.

The Festival is this weekend, so the exodus will probably start on Monday.