The One-Off Technology podcast was first broadcast on February 27, 2016. First season covered a gambit of things, from how to start a podcast, how this one went together, complaints about software and software companies, hardware and hardware companies. We also talked about how to keep your computer safe, cool things you can do with Raspberry Pi computers and about 3D printing.

S1E5 Part 1 was the most popular episode of the entire series. Over the course of the series, we have nearly 1,000 unique users download the podcast but to be honest, only about 244 folks consistently downloaded the podcast. This is only the stats from iTunes Podcasts. We are also on Stitcher and Google Play and we have no easy way to track our success there. Something I plan to fix should we attempt this experiment again.

Episode 9 was the least downloaded episode. I want to thank all of our listeners but I especially want to thank the 36 who downloaded an episode that appeared out of nowhere. Basically there was a 7 month gap between episode 8 and episode 9. To make matters worse, episode 9 was recorded but unedited for over six months. My life had become so hectic and I had lost faith in the podcast. I know and sadly knew that in order for a podcast to gain and keep traction, it had to be consistent and released on an expected schedule whether that been weekly or biweekly or whatever, consistently. Oh, and it had to be interesting.

My issue is that I am interested in so many things. How do you create a podcast that is a catch all for every interest that you have? I often considered doing two or three different podcast titles so I could cover more topics and not steal from one title. But until I can do one podcast consistently it is not time to branch out into other topics.

The other issues with the podcast are the title. What did the title even mean? Also the title was too long to create a Twitter account or an Instagram account. I created a Facebook account but most of the material was the same stuff I posted on my page on Facebook so nothing to drive folks to it really.

Also I lack the art of self promotion. Yes, I see how people hype things but hyping myself is not something I am comfortable with. I am not the greatest things since sliced bread and so to say such things would be lies and I prefer to be my true self. Let the topic be the interesting thing and the way we present it. That was the hope.

I did a survey in some areas where I post frequently asking what people wanted to hear a technology podcast talk about. The winner, Windows patching. Seriously? 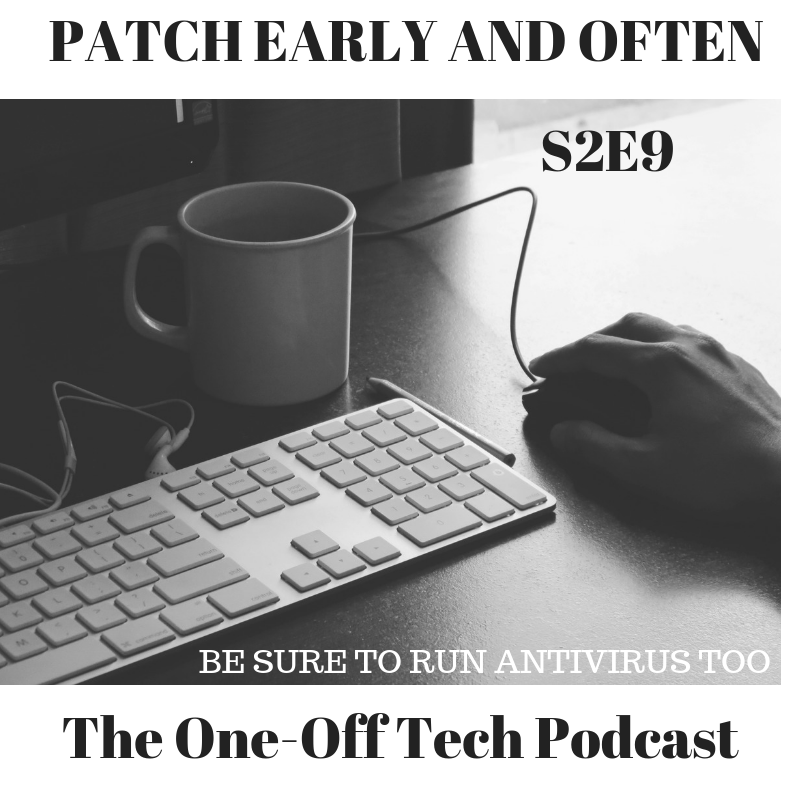 In this episode, we talk about how to keep your PC and Mac safe, at least safer. We bash Microsoft Defender and we talk about why Bacon and Pizza are the amazing foods. And perhaps Anti-Virus software should be named after delicious food so it is easier to pick what is right for you. Also, we talk about Apps that save on data but let you still check your Gmail and other apps. #Podcast #TheOneOffTechPodcast

A review of Microsoft Windows Defender by PC Mag

Here is Microsoft’s side of the story

Malwarebytes (what I use to block Malware, I am not in anyway, shape, or form to make this recommendation)

Web of Trust (plugin for Chrome and Firefox)