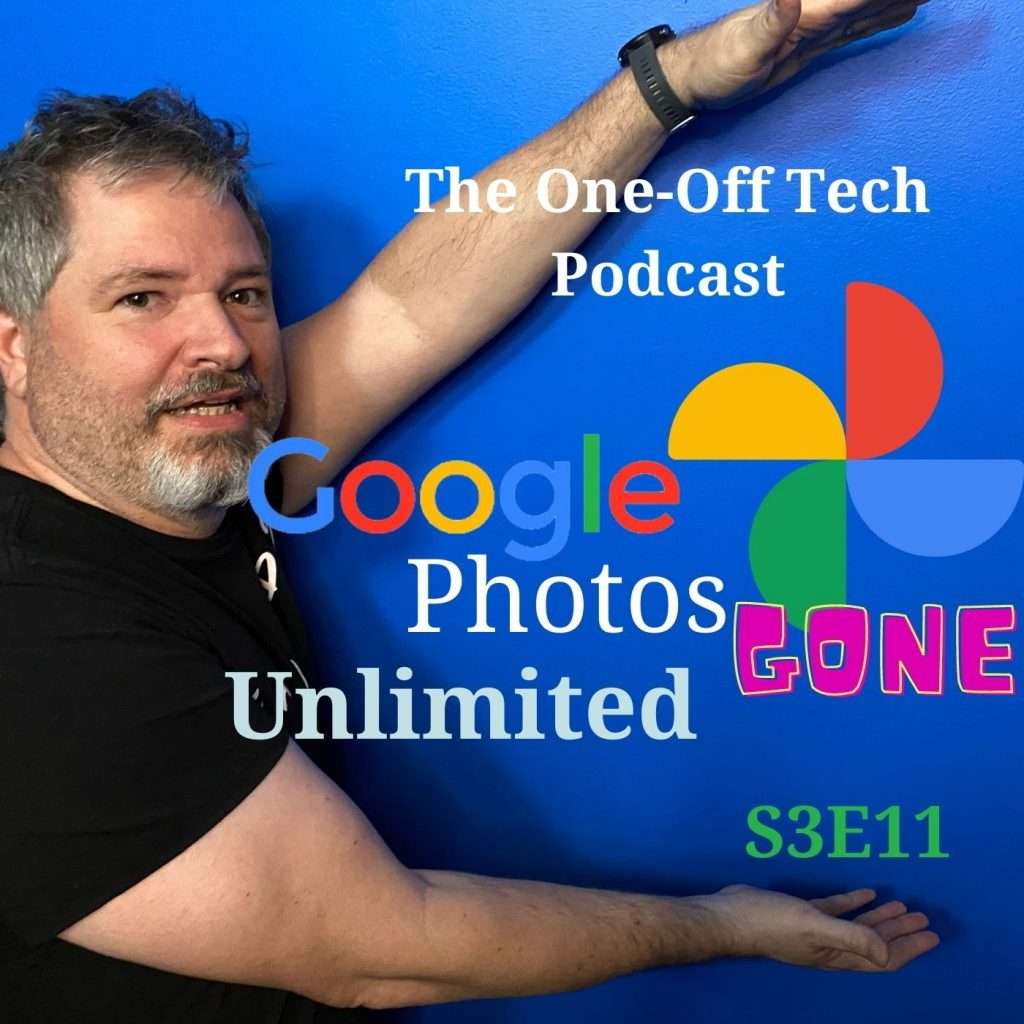 S3E11 Google Photos Unlimited is dying. These are the show notes for the podcast. They are not word for word what the podcast contains but I try to keep them pretty close.

Starting June 1st, Google Photos Unlimited option is gone. If you are like me, you have been using Google Photos to backup your photos on all of your devices (yes it works on iPhone and iPad as well as any PC/Mac or Android device. But the feature is going away and Google is going to rename its High Quality storage feature (which basically compressed and downscaled your images) to “Storage Saver”. In case you didn’t know you get 15 gig total storage with Google. That means your Gmail, your Google Docs, and your Google Photos only have a grand total of 15 gig. So if you get lots of big attachments in your email, you may be eating up all of your storage.

https://www.buymeacoffee.com/techtroublemkr Visit if you want to sponsor this channel.

You can go to this link to see what your storage situation looks like:

So everything you have uploaded before June 1st is your freebie but after June 1st, everything you upload counts toward that 15 gig limit. So you will have to decide “do I want to upload in Original Quality (meaning full size) or Storage Saver?”, which is compressed and downscaled.

Now if you love Google Photos like I do, maybe you want to buy storage from Google.

If you are an Apple family, then you may want to look at iCloud (which only works okay on Windows and isn’t an option for Android) but if everything is all Apple in your house, then iCloud is probably your best bet. You can do 50 gigs for $0.99/month, 200 gigs for $2.99/month and 2TB for $29.90/ month. Ironically iCloud is hosted on Google cloud. Just saying.

Lastly the next option is Microsoft OneDrive assuming you need Microsoft Office. For $99/year subscription with O365 you get 5 accounts each with 1TB of storage and the Full Microsoft Office Suite for your Macs, PCs, Android and iOS devices. OneDrive does not work awesome on Mac but it is good on iPhone and iPad. At least you can just keep snapping pictures and they will be backed up full size. Though you have to open the app for it to backup. iCloud doesn’t have that issue. Google Photos on iPhone/iPad also has to be open to actively backup to your Google cloud. A drawback for sure. You can tell iPhone to default all your photos to Google Photos though and it is easy to work with as you spend a lot more time in the app.

Do you need to stop using Google Photos if you don’t buy in, maybe no. Depends on you and your photo style. Do you need original size images and you take a lot of images? Then the free tier simply won’t do.  But if you don’t take a lot of pictures or if you are mostly happy with Storage Saver versions of your photos, you can get by for a bit. And Google has many great features that are too much to mention in this video and not bore you to tears.

One more option is Amazon Photos. Already an Amazon Prime member, then Amazon Photos offers unlimited photo storage but only 5 Gig of video storage. One of my YouTube videos is 5 gig, so for me that doesn’t work but what if I told you I back up to four cloud services?

I use iCloud 50 gig tier for $12 a year, Amazon Photos because I am already a prime member, Google Drive as I buy 2TB from them to store nearly everything, and lastly I have Microsoft O365 subscription which gives me 1TB of storage per member of my family. I also backup to an external hard drive. Paranoid often? Maybe.

So Google IO, their big product announcement conference and developer fest was last week. As I said last week I would talk about the big announcements. I am such a huge Google Fanboy, but um, well, Google is getting boring. No, seriously.

So they announce Workspaces which integrate their disjointed products such a Gmail, Meet, and their Office Suite better.

Google gave up on their WearOS and are merging their effort with Samsung’s Tizen OS to try and create a better Android watch experience. This means Samsung and Fitbit and Fossil will all be using the same OS and they will have to find ways to make their watches different from each other while running the same OS. This was the challenge before but with Samsung secret sauce thrown in, what will Google do with Fitbit. I love Fitbit and one day I will tell you why I no longer Fitbit.

Google and everybody else is working on their way of making video meetings more 3D by creating 3D models of the person you are talking to so it seems they are right in front of you.

Next Google will make a way for you to animate still photos, think the crazy nostalgia stuff from the Ancestry sites that make deep fakes of famous people in still photos. Creepy.

Actually the coolest product they announced is that Chrome’s built in password manager will help you change compromised passwords right inside the password manager. I do think that is cool. They announced other stuff, a new Pixel phone, Pixel buds, yada yada yada. Google, you have gotten boring to me. Do something amazing already. Odds are something is baking in their labs that should scare the heck out of us and they will announce it at a later date.

This is a short chapter. Apple Vs Epic. The trial is over and in the coming months a verdict will be announced. When that happens, things will get interesting in the Apple App store. Will Apple win or Epic, I think it will be unfavorable for both. If the judge rules against Apple, Google will get its own lawsuits as well, it basically does the same thing as Apple, just not as well. If Epic loses, then consumers’ fates are sealed and we will choose yet not really have a choice, we will have the illusion of choice.

From the Not soon enough machine, Microsoft has announced the end of Internet Explorer. If you install the latest builds of Windows 10, Internet Explorer 11 is not a part of it. You can still go and download it (if you must) but it isn’t on there by default. In fact in June of 2022, it will be dead, end of support. Go Download Microsoft Edge. Seriously. It works on nearly every platform and it is using the same browser engine as Google Chrome and Microsoft has added some features Google has added yet to theirs. I am not a Microsoft fan but I have to give Microsoft credit, Edge isn’t too bad. Though on my Mac I have resorted to using Safari again after all these years of only Chrome and sometimes Firefox.

And that is it for this week. Here is a brain teaser. What if Netflix goes into the video game streaming business? That and all the tech news that is worth talking about on next week’s show.

Thank you so much for listening to the podcast.

When is doubt, reboot.