I recently saw an article about our mobile phones from the past. It got me to thinking about the mobile phones I have had over the years.

When I graduated from the local Technical College, I decided to reward myself with a mobile phone. Work had me tethered via a pager, but if I ever needed to call into work I would either have to go home or go to a payphone (yes, payphones still sort of existed when I got my first mobile phone).

Here is a link to a PC Mag review

My first cell phone was an Audiovox CDM 9000. It was a candy bar phone. This was before smart phones existed. Steve Jobs had not even talked about the iPhone. Bluetooth wasn’t a thing yet either. So I had this phone, which worked great. It was both digital and analog. So where it could it make digital calls and where it couldn’t it made analog. The funny thing about this phone is that it could receive text messages but could not send them. I do not know why. I never figured out why. But it was such a good phone that I had a car kit installed into my car (a Chevy Impala at the time).

It was a nice car. I love the phone as it seemed to be the only phone among my friends that could actually make a call when we were hiking.

In fact, when a group of friends and I hiked a part of the Appalachian Trail in Georgia we happened upon an elderly man at the top of Justus Mountain. This man motioned toward us as we reached the top as if something was wrong. So we went over to inquire. He told us he needed help, he was peeing blood, and that he needed water. So luckily we had just filled up so I offered him some of mine. I then called 911 from the top of the mountain. We had all pulled our phones out and mine was the only one that had gotten enough bars to make a call. So we called the 911 dispatcher and luckily, while we often didn’t on this hike, we actually knew where we were. So I told the dispatcher we were on Justus Mountain and that we had just crossed a forestry road that cross the AT. So Gary and I took the man’s pack and helped him descend down the mountain while the others waited with our stuff at the top of the mountain. This was in April of 2001. Luckily an ambulance was able to make it to our location and carry the man out on a stretcher. I gave the man my address as we were all curious to know what happened afterwards. Months passed and we heard nothing.

Two weeks after September 11 I received a package at the post office. I wasn’t expecting one and being so close to 9/11, I was concerned. But I decided, I am a nobody so why would I get a mysterious package. So I opened up the package and found four jars of homemade strawberry preserves and a letter. The man told me he had hiked a trail in Florida two weeks before his trip on the AT and with the drought that year, he had a hard time finding water and basically wound up drinking out of a mud puddle or two. He felt he must have caught some time of intestinal bug because of it and he spent a week in the hospital from that and dehydration. The preserves were a thank you gift for helping him. I gave the jars out to the others. Though they were scared to try them, again so close to 9/11. So I opened my jar and it was great. Everyone else hopefully tried theirs or else they missed out. 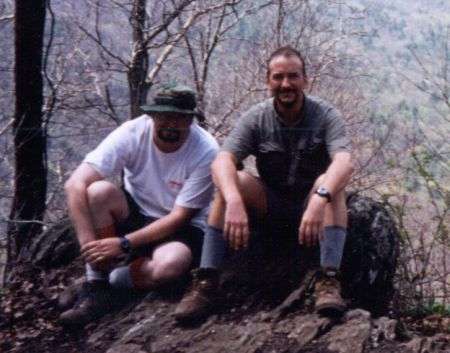 Here is a picture from that trip. I am not sure what mountain this was on but it was the same trip.