Tweets by @aroyrichardson
BEGIN TYPING YOUR SEARCH ABOVE AND PRESS RETURN TO SEARCH. PRESS ESC TO CANCEL
Skip to content
The FrankenMacbook?
The Mac/Linux/Book? 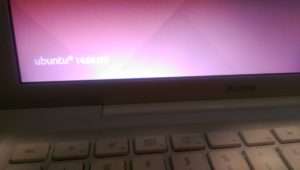 So my youngest wants her own computer. I have a perfectly good Macbook laying around she can use but because it is stuck in 2007 (aka Macbook 3,1) it could never get past Lion as its OS. This means a lot of current stuff won’t work because it isn’t the latest or next to latest Mac OS. So I got the crazy idea to install Linux. Downloading a Distribution aka Distro of Linux is usually not an issue but today my Internet did not want to cooperate today.
BTW, the New York Times and many other publications are now referring to the Internet as lowercase internet. I am not sure I am ready for that.
Anyway, so I downloaded a program called rEFInd Bootloader to setup multiboot on my old Macbook so it could keep the Mac OS as an option. Then I used the disk utility built into Mac OS to shrink the primary partition to give me a 50 gig partition for whatever Linux I decided to use. Many articles on the Internet wanted me to use some really old versions of Linux, mainly because no one had updated articles on my particular Macbook to say, yep, it worked with newer versions. After an attempt at Linux Mint 17, I gave up and went back my original choice, Ubuntu. Basically whatever downloaded first I would try first.
So it was decided I would try my luck with Ubuntu 14.4 32 bit. This particular Macbook was considered 64 bit but yet the bootloader was 32 bit so it never fully was 64 bit, just sort of. I figured with less bits, perhaps it will be okay. Besides the max memory on this puppy is 4 gig.
Now I had seen many horror stories about Ubuntu not seeing the Broadcom wireless card in this Mac and well, I thought perhaps since all the fussing was about older versions of Ubuntu, maybe someone had fixed that. One option was to hook up the Mac via ethernet directly to my Internet router and then download the Broadcom driver later on after the install. I didn’t want to move so all of the gear and powercords and everything else close enough to be able to do that so luckily I had a Edimax nano USB Adapter that I have used on nearly every OS you can name that supports USB 2.0 well. Sure enough Ubuntu saw it and loaded up a driver so I got to stay in the lab and keep working on the project.
After the reboot, Ubuntu had loaded the needed driver for the AirPort card (Broadcom) and so I was in business and able to remove the Edimax nano adapter. Good times.
I will give you an update as things progress. Next challenge, install Java 8 and Minecraft.