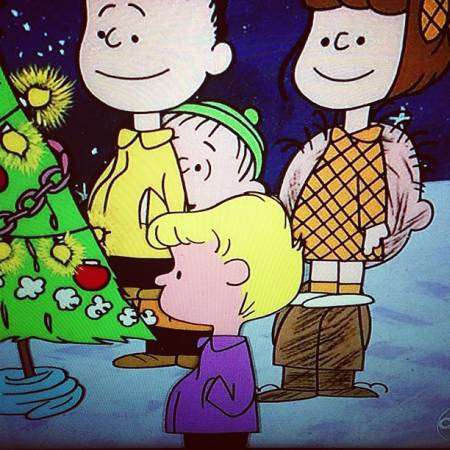 Editor’s Note: I am not a preacher or pastor, nor am I ordained or have I been to seminary. As a Lay Leader I am called on from time to time to fill in at various churches.

In this age of commercialism, it can be hard to have Christmas spirit. But do you know what gives me Christmas spirit every year, watching Charlie Brown Christmas. You know the Peanuts gang, Charlie Brown, Linus, Lucy, Snoopy, and Woodstock. All from the mind of Charles Schulz. Sparky, as his friends called him, was raised for a time in the Lutheran church. He later taught Sunday School in a United Methodist church for several years.

Every year I can’t wait until after Thanksgiving because stashed at work I have a Charlie Brown Christmas tree. My wife gave it to me a couple of years back as she knows I am a big fan of the Peanuts gang and especially Charlie Brown Christmas. So I clear a place on my desk. It is made of plastic which is kind of ironic as Charlie chooses a real tree over all the plastic trees on the tree lot. But my tree has a stand you put together and then you put the tree on it. The tree of course is bent over and doesn’t have very many pine needles and on it there is one Christmas ornament. And there is a piece of felt that is the same color as Linus’ blanket which you put around the tree. My tree does have one thing Charlie Brown’s did not, it has a hidden button you can push that plays the Charlie Brown theme song. Come see me sometime and I can show you a picture of the tree on my desk at work.

Noted author, Robert L. Short wrote a book series that started with a book called, “The Gospel According to Peanuts” where he explained how Charles Schulz’s characters showed us a lot about Christianity. One example Short talks about is “the attitude Linus has toward Santa Claus is the same attitude many Christians have toward God: they feel that by obeying his ‘law,’ God then owes them something. Again, this means that the gift of God is not a gift, that ‘grace is not grace,’ but a reward for man’s own righteousness — and hence an occasion for an inevitable human pride.” “Why are we seemingly comfortable with a system of obedience and rewards rather than a pure gift of grace? Does pride get in our way?”  I had found a copy of the book at a yard sale years ago. I picked it up mainly so I could read all of the Peanuts comics it featured and I was too young to know I should be reading books and not just looking at the pictures. You know, he is right. Sometimes pride does get in the way.

Next year will mark the 50th anniversary of Charlie Brown Christmas. It first was shown in 1965. Would you believe it almost didn’t happen? Coca Cola called up and asked if he had thought of ever making a Charlie Brown Christmas show. “It was based on the comic strip Peanuts, and was produced and directed by former Warner Brothers animator Bill Melendez, who also supplied the voice for Snoopy.” In PBS special called American Masters an episode that featured Schulz, he said CBS had some problems with his ideas for the program. The first, he did not want a laugh track. This was unheard of in TV back in 1965. Every show had a laugh track so people would know when to laugh because, well, I guess we weren’t smart enough to know. They actually made a copy of the show with a laugh track in case they could change his mind.

Oh and they didn’t like Schulz’s idea of using children for the voices. They thought it should be adults doing the kids’ voices but Schulz wanted no part of that. And the music,  Vince Guaraldi Trio’s Jazz soundtrack, well, that was too old. The Network wanted something younger sounding.

And last but not least the network freaked out because Linus was going to recite from the Bible on a Christmas special. So when the show premiered, CBS was certain it was going to be a flop. That no one would watch. Seems the meaning of Christmas was lost way before 1965. But you see, the show was popular with critics and fans.

According to the National Review, “The half-hour special aired on Thursday, December 9, 1965, preempting The Munsters and following Gilligan’s Island. To the surprise of the executives, 50 percent of the televisions in the United States tuned in to the first broadcast. The cartoon was a critical and commercial hit; it won an Emmy and a Peabody award.”

Linus reciting from Luke 2 using the King James version of the Bible is the highlight of the show to me. And that is our scripture lesson for today.

8 And there were in the same country shepherds abiding in the field, keeping watch over their flock by night.

9 And, lo, the angel of the Lord came upon them, and the glory of the Lord shone round about them: and they were sore afraid.

10 And the angel said unto them, Fear not: for, behold, I bring you good tidings of great joy, which shall be to all people.

11 For unto you is born this day in the city of David a Saviour, which is Christ the Lord.

12 And this shall be a sign unto you; Ye shall find the babe wrapped in swaddling clothes, lying in a manger.

13 And suddenly there was with the angel a multitude of the heavenly host praising God, and saying,

14 Glory to God in the highest, and on earth peace, good will toward men.

The Word of God for the people of God. Amen.

In the Charlie Brown special that scene lasted just 51 seconds. When Linus is done, Charlie Brown realizes that he did not have to give in to commercialization. He gets excited and picks up his fragile tree and walks out of the auditorium planning to go home and decorate his tree.

A few years ago when Rev. Chris was here he asked me if I would be interested in doing something called “Walk to Emmaus”. Turns out Ken over at our sister church had coerced Chris to go. Chris told him he wouldn’t go but he wanted Ken to participate in a Bible study he was going to do called  “Disciple 1 Bible Study”. I had signed up to do the Bible study and about half way through occasionally Benji and I would lead it if Chris was away. It was a 34 week Bible study that lasted 2.5 hours each Sunday night, well sometimes longer. Mrs. Boots attended too. I agreed to do “Walk to Emmaus”. The men go one weekend and the women go the next. It is intended to help strengthen Christian Leaders. And strengthen it does. Donna went the weekend after me. There are fifteen talks over the weekend given by laity and clergy. Donna and I sponsored Mrs. Boots and she went one weekend. RT wants to go as ministers are allowed to go as well. But with Karen’s health problems he hasn’t been able to go. While I was on my weekend, which goes from Thursday night to Sunday night and you aren’t allowed to take your watch or your cell phone because you are on God’s time. It is such an amazing experience. I encourage you to go and if you are interested, please let me know. There is a walk coming up in the Spring, the first two weekends in March.

Anyway, I remember hearing someone talk about a statue of Jesus in Germany that lost its feet and hands in World War II. So they placed a sign on the statue that reads, “You are the Hands and Feet of Christ”. And it is true. You are. I know you have had those God moments as I have. God put this person in my path so I could talk to them. I have allowed opportunities to pass me by. I didn’t allow God to use me as his hands and feet. I did not witness to someone who God wanted me to witness to. As you go out into the world, be the hands and feet of Christ. Don’t allow an opportunity to witness to someone pass you by.