How do you define expert? 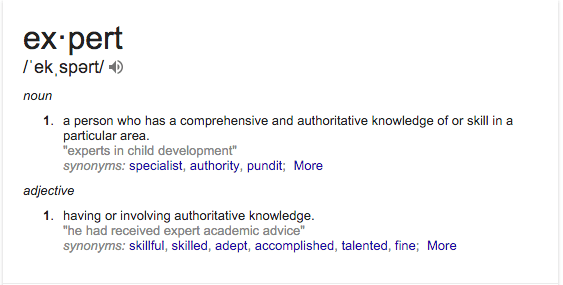 I have always been leery of so-called experts. A long time ago I worked for a company that implemented a major Enterprise Resource Planning project. We simply did not have enough experienced staff so we hired an outside consulting firm to help offset our staff shortage. The consulting company was one of the well respected ones of their day and we were paying huge hourly rates for these people. They had Subject Matter Experts (SMEs) and then they had some that were supposed to be the smartest of the bunch who were project leads. The project leads were $350 a hour. The SMEs were $150 an hour. Turns out the SMEs were mostly college students who went through a two week “boot camp” on the topic they were hired for and often we were their first customers. Before the project was over, we let the company go and decided, thanks but no thanks. From that I became skeptical of any one who called themselves an expert.

Years later we hired a consultant again who was highly recommended. We even interviewed him ahead of time having learned our lesson from previous consultants. He was a rock star, at least at interviewing. He knew all the buzzwords and since the product we needed help with we only knew a little, it seemed he was a good fit. When he arrived we left him to his own devices so to speak because again, we were short staffed. However, he began to ask a lot of basic questions that he should have known the answer to. An analogy that comes to mind is a baker. Because a person worked in a bakery and frosted cakes, doesn’t make him a baker. When our baker left, we had to not only clean the kitchen but destroy the bakery. One day out of the blue I received a call from someone looking to hire this consultant and asking for a reference. Not wanting to say anything bad, I said, “He is good at the things he does well.”

Today I was looking on Klout, which I know has lost a lot of significance and has struggled to find a new identity, but I find it interesting what they say and sometimes the Klout scores tell you something about people you are thinking of following or who are giving you advice on topics you care about. I looked and Klout said I was an expert in a lot of things. 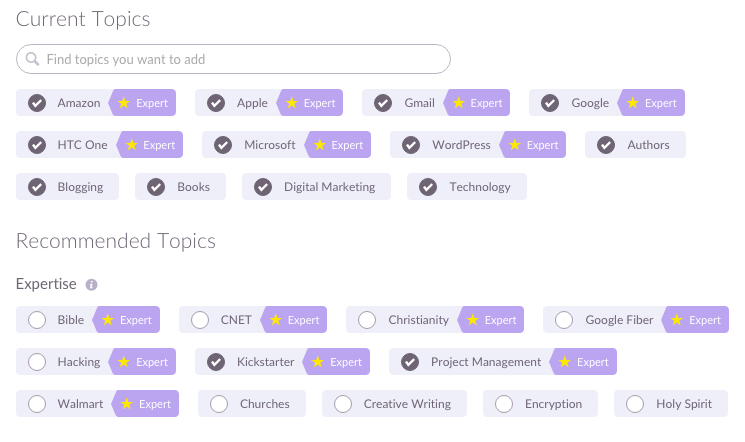 These are picked by Klout and not by me, supposedly based on the content I post about on Twitter, Facebook, Google+, and Instagram. The Starred ones are what Klout says I am an expert on. The checkboxes are the ones that I sort of agree on. But there are some that I just don’t understand. The Bible and Christianity. Those jump out at me. I am a Christian but I am not an expert at it. I know most of the things I am supposed to do as a Christian, but I not always faithful to God as I should be. And while I read the Bible and have read it cover to cover a few times and I have done Bible studies and do research on my own about the Bible, again, I am not an expert. I want to be but even if I were a Seminary schooled preacher, I will never know all there is to know about the Bible. And Walmart? Why am I am expert on Walmart? I don’t recall ever posting about that. Google Fiber, I know a lot about but not being an actual Google Fiber customer, there are things I probably will not know because experience is usually the best teacher.

Are you an expert? How do you define expert? How about those around you who say they are experts? Are they?