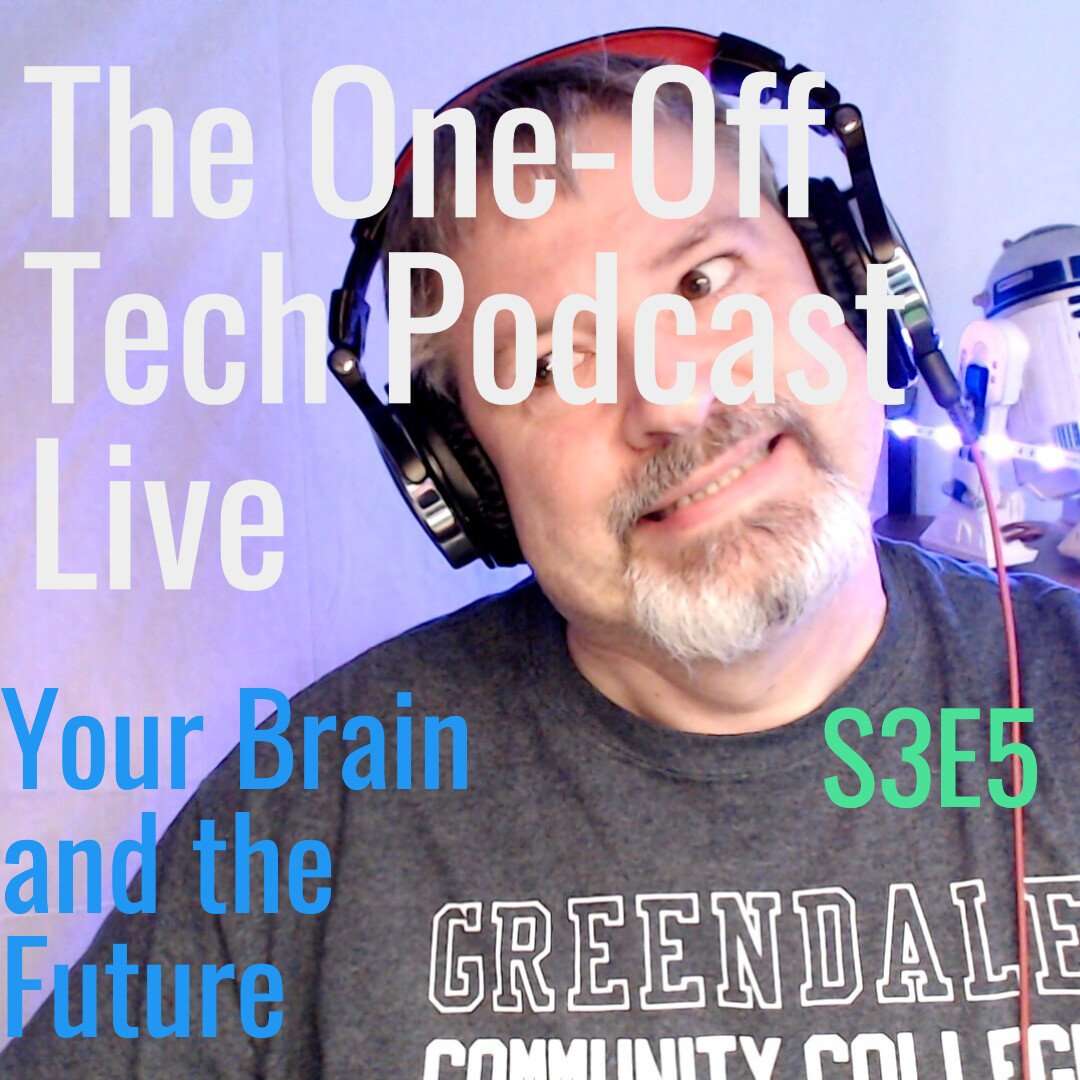 So what if you could play a video game with your mind? In the news this past week Elon Musk’s Neuralnet announced they had installed brain implants into the brain of a macaque monkey. They then taught him how to play Pong using a joystick by giving him banana smoothies via a straw while he was playing as a reward. They used the neural links to capture what his brain saw as his hands moved. Then they took the joystick away and he continued to play using only his mind via the neural links. This is Season 3 Episode5 and Today we are going to talk about technology and the future and visit some other tech news along the way.

Welcome to the One-Off Tech Podcast. I am your host Roy Richardson and each week we talk about tech topics and how they affect you. So sit back, listen and open your mind.

I have always dreamed of a world like science fiction predicts we will live in. Flying cars, computers the size of phones (oh wait we already have those). The flying cars aren’t here yet but we have phones in our pocket that are more powerful than the 486 CPU computers that launched the Space Shuttle.

So what if we could use our computer with only our minds? The cool part is using a computer with our minds. I don’t have to type anymore. I can think “words” to the screen. We aren’t there yet but the time will come. On the flip side, I don’t know about you but my mind doesn’t’ have the filter my mouth has most of the time when I think thoughts and I am smart enough to keep them in my head and not say them out loud. Admittedly my filter isn’t as good as some others and I will say things that really should have been kept inside. But the next leap is someone puts the neural links into our brains or maybe they don’t even have to be implanted and every thought we have escapes. In the meantime, it is fun to watch a monkey play Pong.

I am almost social. You can find me on Twitter, Instagram and now Clubhouse as @aroyrichardson. So the question maybe if you are late to the party, what is Clubhouse? Clubhouse is an audio only, invite only, iPhone only social network. Folks who think they are authorities on something or who like to hear themselves talk (that would probably be me) to there and start “rooms” and become the moderators of the room. They decide who comes on stage. The stage is the area of the app where you are allowed to unmute to talk. You see, when you visit a room you come in muted unless you are invited to the virtual stage. And then proper Clubhouse etiquette is you stay muted until a moderator says it is okay for folks to unmute and talk. You ride the mute while in the room, kind of the way I do Zoom meetings. But Clubhouse is really cool and there is a lot of open dialog going on there. So far I haven’t seen a lot of troublemakers there but there are a lot of folks bragging about themselves and trying to sell you stuff.  There are a lot of folks offering free and often helpful advice on faith and life and money, real estate and so on. In some ways it reminds me of a cross between a podcast and a call in radio talk show. Want to find out what Clubhouse is about? The first two folks who reach out to me via DM on Twitter or Instagram, I will send you an invite. You do have to have an iPhone as they have not released an Android app yet and they don’t seem to be in a hurry. Look me up @aroyrichardson on those platforms. And did I mention it is invite only? Yes, you see it makes it seem exclusive so everyone wants in. And the funny thing is, everyone is getting ready to copy Clubhouse. Expect to see versions of Clubhouse on Twitter, Facebook and even LinkedIn. It will get strange before it gets stranger.

So do you reuse passwords to different websites? Are you using two factor authentication? Are you using crappy passwords? Stop. The days of passwords are numbered. With FaceID, Microsoft Hello, TouchID, and the finger scanner on many phones eventually we will do away with passwords. Why? Because 1)too easy to forget. Every have a day when the password you type in every day suddenly escapes your brain. You have muscle memory. Your fingers just type it. You don’t even think about it. It is just a habit. Recently LastPass a password manager suddenly decided they no longer liked their users having a free tier. This was they hook’em till they buy it scheme for a long time and it worked but obviously they didn’t feel they were making enough money. So the Internet is scrambling for alternatives. I have used Keepass, which is open source and is available for free on nearly all platforms except iOS. So when I was forced to go iPhone, I was challenged by what will I use as a password manager for the hundreds of passwords I need to keep up with. So I had gone with 1Password. I don’t make any money from recommending them but I do recommend trying a free trial of 1Password. I wound up with the family plan as my wife decided she would be lost if I should parish and she needed access to all of the accounts I use on my family’s behalf. I decided she was right so with the Family plan she can access the same passwords I use. Now I just wish she was as paranoid as I am but perhaps that is a good thing too.

That’s it for this week. I hope you enjoyed the show. I want to apologize for the mishaps on audio for a couple of weeks. Mistakes were made and I decided content was more important than audio quality. I think I was proven wrong and for that I am sorry.

Finally this week I want to end on a very serious topic. A fifth grade STEMS class at Tucker Middle School in Georgia are finalists in a Samsung challenge to “Solve for Tomorrow”. They have created a silent alarm that goes into airline bathrooms that would allow girls who are victims of human trafficking to alert the crew of the plane they are in danger. It also releases an adhesive that allows them to be tracked as they get off the plane. The shocking thing I read in this article was that over 300 women a month in Georgia are victims of human trafficking. First I applaud these students for creating something so useful. But I am saddened that this is a need. I had no idea.

Thank you so much for listening. This was Season 3 Episode 5 of the One-Off Technology Podcast. Look for me on Twitter, Instagram, and Clubhouse. The show notes can be found at oneofftechpodcast.com which will redirect you to my blog faithandtech.com which needs some love. Have a great week.